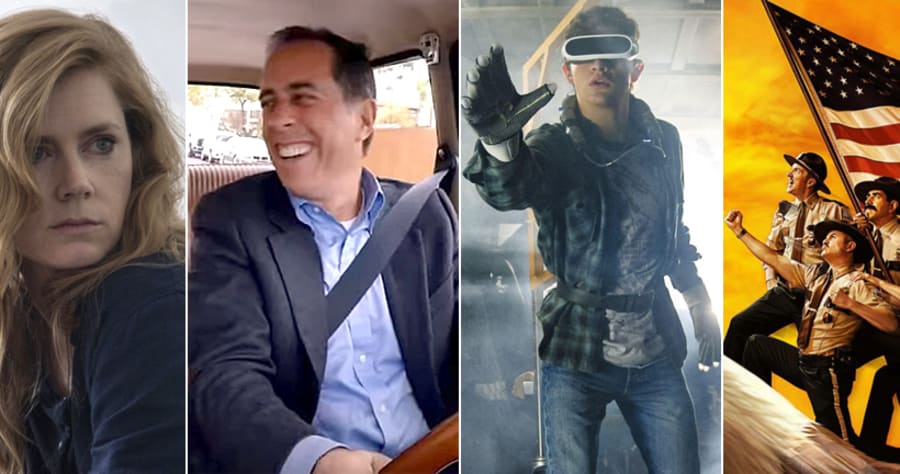 At a loss for what to watch this week? From new DVDs and Blu-rays, to what’s new on Netflix and TV, we’ve got you covered.

“Ready Player One”
Game on! Steven Spielberg’s sci-fi adventure will be ready for you on digital platforms Tuesday, July 3, and then on Blu-ray, DVD, 4K Ultra HD, and Blu-ray 3D on July 24. The DVD comes with the special feature “The ’80’s: You’re the Inspiration.” The Blu-ray and 4K also have that, plus five more behind-the-scenes making-of featurettes.

“Super Troopers 2”
The 2001 comedy got itself a sequel — following a border dispute between the U.S. and Canada — and you can check it out on Digital and Movies Anywhere July 3, then on Blu-ray and DVD July 17. Extras include extended and deleted scenes, “The Making of Super Troopers 2,” and a Kevin Heffernan “Method Actor” featurette.

“Hover”
Cleopatra Coleman (“The Last Man on Earth”) wrote the script for and stars in this sci-fi film available on VOD and Digital July 3. “Hover” takes place in the near future, where environmental strain has caused food shortages around the world. “Technology provides a narrow path forward, with agricultural drones maximizing the yield from what land remains. Two compassionate care providers, Claudia (Coleman) and her mentor John (Craig muMs Grant), work to assist sick farmland inhabitants in ending their lives. After John dies under mysterious circumstances, a group of locals helps Claudia to uncover a deadly connection between the health of her clients and the technology they are using.” Check out the trailer.

“Chappaquiddick”
Jason Clarke plays Senator Ted Kennedy in this drama following the infamous 1969 Chappaquiddick incident, when Kennedy drove his car into a lake, killing Mary Jo Kopechne (Kate Mara). The film — costarring Ed Helms, Bruce Dern, Jim Gaffigan, Clancy Brown, and Olivia Thirlby — arrives on Digital July 3 and then Blu-ray, DVD, and On Demand next Tuesday, July 10. Extras include the featurettes “A Reckoning: Revisiting Chappaquiddick” and “Bridge to the Past: Editing the Film.”

Check out this exclusive clip focused on Ed Helms’ role as Joe Gargan:

“Anne with an E” Season 2 (Netflix Original)
Carrots is back! Return to Green Gables — with new faces and new heartfelt lessons about love, loss and growing up — when Anne, Gilbert, and friends return for Season 2 on July 6. Here’s the trailer.

“The Sinner” Season 1
Jessica Biel’s USA Network drama is the perfect show to binge. Watch all eight episodes starting July 2, then prepare for Bill Pullman’s Detective Ambrose to return in Season 2, which premiers August 1 on USA.

“The Legacy of a Whitetail Deer Hunter” (Netflix Film)
Josh Brolin and Danny McBride star in this comedy from director Jody Hill (“Vice Principals,” “Eastbound & Down”) arriving on Netflix July 6. “Buck Ferguson (Josh Brolin), famous for hunting whitetail deer, plans a special episode of his hunting show around a bonding weekend with his estranged son, Jaden (Montana Jordan). With trusted – but hapless – cameraman and friend Don (Danny McBride) in tow, Buck sets out for what soon becomes an unexpectedly epic adventure of father-son reconnection in the great outdoors.” Here’s the trailer.

In other wolf news, these titles are also arriving Friday, July 6:

And here’s even more coming this Friday, ’cause Netflix is just determined to steal all of your time and attention:

“Sharp Objects” (Sunday on HBO at 9 p.m.)
Amy Adams stars in the latest adaptation from “Gone Girl” author Gillian Flynn. That should have you on board already. Adams plays reporter Camille Preaker, who returns to her small hometown to cover the murder of a preteen girl and the abduction of another. Patricia Clarkson,Chris Messina, Eliza Scanlen, Elizabeth Perkins, and Matt Craven costar in the dark eight-episode limited series.

“12 Monkeys” Series Finale (Friday on Syfy at 9 p.m.)
No more “Monkeys.” The Syfy show ends after four seasons with a two-part finale called “The Beginning.” In Part 1, Episode 10, “The final battle against the Witness begins as the fate of time and mankind hangs in the balance; all the pieces finally come together to mark the end of the beginning.” In Part 2, Episode 11, “When all hope is lost, Cole must complete his cycle so that his younger self will one day arrive at the end with the answer.”

“Evel Live” (Sunday on History at 8 p.m.)
This could be completely crazy, but — if that’s your thing — consider watching this three-hour live event premiering July 8 as part of History’s second annual car week. During “Evel Live,” “American professional motorsports icon Travis Pastrana will honor legendary daredevil Evel Knievel by attempting three of his most dangerous feats in Las Vegas, Nevada, all while riding a modern day recreation inspired by the motorcycle Knievel used. … If Pastrana rides away from all three, he will be the only person to successfully beat two of Knievel’s distance records and land a jump over the fountain on a v-twin motorcycle.”

New on DVD and Blu-ray

“Blockers”
This hilarious and heartwarming teen sex comedy stars John Cena, Leslie Mann, and Ike Barinholtz as parents who’ll do anything to stop their daughters’ prom night sex pact. The film arrives on DVD and On Demand July 3. Extras include deleted scenes, a gag reel, and behind-the-scenes featurettes on “Prom Night,” “The History of Sex with Ike Barinholtz,” “John Cena’s Prom Survival Kit for Parents,” “Puke-a-Palooza,” and more.

“Beirut”
Jon Hamm, Rosamund Pike, and Dean Norris star in this acclaimed drama-thriller available on Blu-ray, DVD, and On Demand July 3.” CIA operatives caught in the crossfire of civil war must send a former American diplomat on a mission to negotiate for the life of a friend he left behind.” Extras include the making-of featurettes “The Story Behind Beirut,” with Jon Hamm, Rosamund Pike, and former CIA Officer Whitley Bruner; and “Sandy Crowder,” with Pike discussing her role as CIA Agent Crowder.

“Another WolfCop”
“WolfCop” writer/director Lowell Dean returns with this horror comedy sequel arriving on Blu-ray, DVD, and Digital on July 3. Extras include “The Making of Another WolfCop,” “Friends & Foes: Meet the Cast,” “The Monster Shop: Special FX,” “Shoot or Die! Surviving On Set,” and the “Barn Burner” music video by Shooting Guns.

“A month has passed since the dark eclipse transformed hard-drinking Officer Lou Garou (Leo Fafard) into the infamous lycanthrope crime-fighter. Although the evil that controlled Woodhaven was defeated, the community is far from returning to normal. A villainous entrepreneur (Yannick Bisson) is looking to open a new brewery and revive the local hockey team, but it’s clear he has ulterior motives. With a new mayor (Kevin Smith) and the new chief of police (Amy Matysio), WolfCop has his work cut out for him when he has to save the town all over again.”