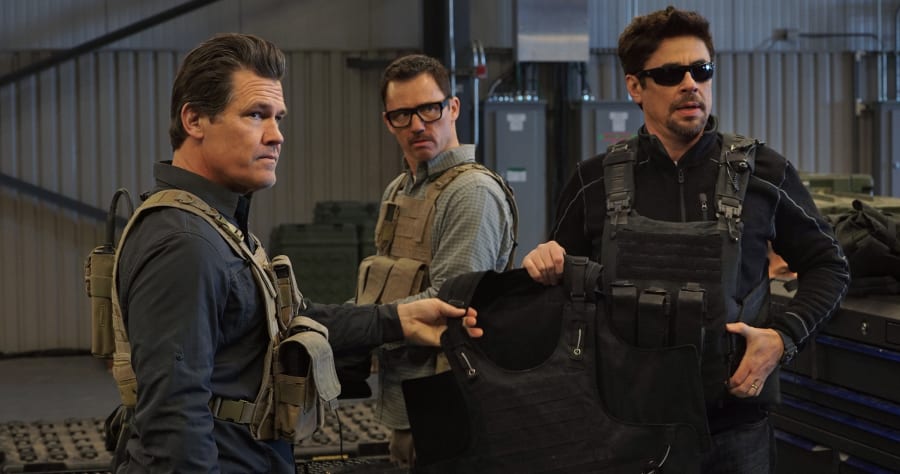 Chances are, if you’ve seen Denis Villeneuve‘s 2015 thriller “Sicario,” you were riveted.

The tale of a morally compromised CIA agent (Josh Brolin), who teams with a Mexican associate (Benicio del Toro) and a plucky young agent (Emily Blunt) following some gruesome murders on this side of the border, it was the kind of stark, uncompromising movie that created a nearly unbearable level of tension and suspense with each passing moment. It was also the type of movie whose world was rich and expansive enough that it practically begged for a follow-up.

And that follow-up is finally here, in the form of “Sicario: Day of the Soldado,” a movie that reunites Brolin and del Toro (Blunt sat this one out), for a story of escalating violence in Mexico and the ways in which the American government both facilitates and reinforces that violence. And when things get out of hand, it’s up to del Toro’s Alejandro to make a very difficult choice. The less you know going into the movie, the better. But it definitely delivers on the high-octane mixture of thrills and political intrigue that the first film provided, with even more insightful cultural commentary.

So you can imagine our thrill when we got to sit down with Stefano Sollima, the Italian director who took over for Villenueve and who made a movie all his own. Sollima has made a number of Italian crime movies and television series, and will next turn his attention to a big budget adaptation of beloved videogame franchise “Call of Duty.” We got his thoughts on what it was like taking over the franchise, what it has in common with the “Alien” series, and why he wants to make a videogame movie, given that genre’s track record.

Moviefone: What was it like going from Italian gangsters to the Mexican cartel? Were there similarities?

Stefano Sollima: Oh, yes. But more than the world, because the world is something you have to study a little bit before approaching a movie, it’s more that they have the same style and the same approach to the movie that I love. This, I felt, was really close to my style. And that’s the reason I said, “Absolutely, yes.”

Can you talk about your approach to shooting this movie?

Well, I used multiple cameras but only when necessary. It can get tricky. The most important part of the action is basically done with one camera, particularly the convoy sequence. It’s completely done from the inside. That’s exactly the opposite of the multiple camera concept. You make a decision, it’s a risky one, but you’ve got to make it work. So we did both. I’ll say this, when they offered me the project, I said I was going to do it — but I don’t want to use anyone from the previous movie. Because I felt that it was too interesting, the idea, to make this kind of trilogy by having different directors with the precise style and with the script that has a precise style. This is not related to the first one. It’s a stand-alone movie, essentially, where everything has a bigger scale. It’s a completely different movie, but being respectful and being in the same world. I felt it was really important to do it with a fresh point of view with fresh energy.

Did you talk to Denis before shooting?

No. I think that the movie speaks for itself, “Sicario.” And “Soldado,” the script was pretty clear. The only thing was to go deeper into these two characters and show something that was unexpected for the audience and for us too. It was a cool experience.

Was the Emily Blunt character ever in the script?

When they announced this movie, they made it seem like you’d be back for the third movie. But it sounds like you’d want another director to come in?

Well, I haven’t spoken to Taylor [Sheridan, the screenwriter] but I’m pretty sure he’s working on it. It’s also good for this fresh, different franchise to find another director who is crazy and who has a slightly different vision but has respect for the body of work.

Exactly! When I read the script, I thought that. It’s like “Alien.” You have some of the characters — you go back and forth in time, you don’t give a s**t. And then you find directors who have a specific vision that you can recognize. It’s exactly the example I used. This is the reason I changed everybody. It’s a challenge. It’s cool if you change.

Well, they know these characters. You are in a strange position because they already have played the character, but the tricky part and the smart part of the script is, like — in the first one — they were watched by Emily Blunt’s character, and her character was a sort of audience surrogate and a moral point of view because she was judging them constantly. And in this movie, you don’t have any filter. So you have these two characters in front of you, and they are going to face so many difficulties that are going to be put in front of them that, of course they — as an actor — have to explore new aspects of their own personality. This makes the journey really interesting. Because it was a challenge for them, too. They had to say, “Okay, I was this Alejandro in the first one,” for example, “I was moved by rage, by the desire for vengeance, and now I am protecting the daughter of the guy that killed my family.”

And, for example, that beautiful scene [involving] sign language, you have a sort of tone shift in that scene where you show something unexpected. You explore deeper and deeper these characters.

Was it hard to not have that audience surrogate?

No. I love to work with anti-heroes. It’s what I’ve done all my life. And it’s one of the reasons I loved the script.

You’re about to go into an even bigger movie with “Call of Duty.” Did you play the videogame?

Of course. I’m a huge fan. Ever since I played with my two kids, and then I died much faster than them. It’s more that I play and then I watch them play.

What is the appeal for you, as a filmmaker, to do “Call of Duty”?

Most of all, I want to make it a movie. A movie is completely different than a videogame.

But people have made mistakes with videogame movies in the past.

I know, but this is just a challenge. Because basically, what you have to do is just make a great movie.