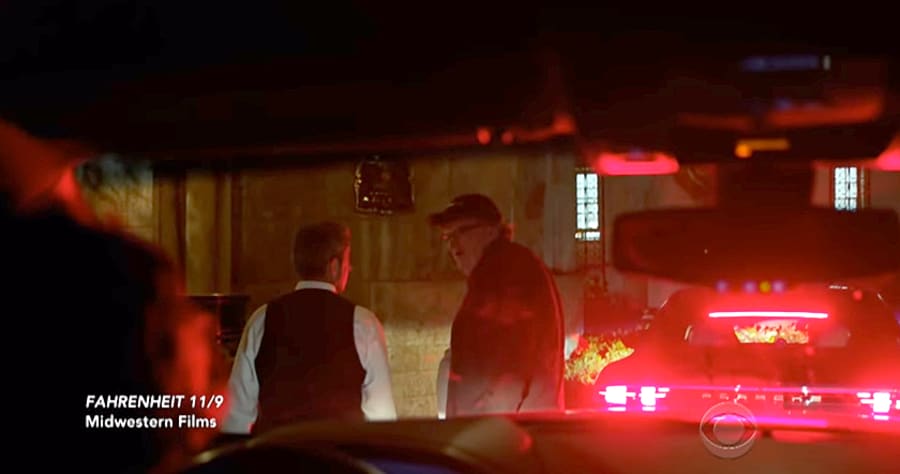 In 2004, Michael Moore presented “Fahrenheit 9/11,” a documentary on President George W. Bush’s administration and the War on Terror. It won the Palme d’Or at Cannes and became the highest grossing documentary to date.

Now it’s 2018 and Michael Moore is back with another incendiary political doc, this one flipping the title to “Fahrenheit 11/9.”

Moore was on “The Late Show with Stephen Colbert” last night to talk about the film, and show off a brief clip:

“I’m finishing the film right now, it’ll be out September 21. It’s called ‘Fahrenheit 11/9,’ the night he was announced as President of the United States. […] This is about how the hell we got in this situation, and we’re gonna get out of it.”

The “he,” of course is president Trump. Moore said he’s in the final edit at this point.

Around the 1:40 mark of the video below, “The Late Show” aired a clip from the film, with Moore trying to get into Mar-a-Lago to visit “the southern White House.” It didn’t go well.

Michael Moore is always good for opinion piece documentaries. It’ll fire up the people who agree, and piss off the people who disagree. As usual. This is his lane!

Moore most recently directed/produced “Michael Moore in TrumpLand” in 2016 and was part of “Roseanne for President!” in 2015. He’s most famous for the 2002 film “Bowling for Columbine,” which won the Oscar for Best Documentary.